The term NetOps can be perceived in two ways:
1) A portmanteau of network and operations – also called NetOps 1.0
2) NetOps 2.0, or Agile NetOps

NetOps 1.0 is the traditional approach to networks and their management. It’s characterized by bulky, hardware-heavy networks, network tasks executed through CLI scripting, and network teams working in isolation from application and security teams. According to Gartner, NetOps 1.0 is:

NetOps 2.0 is a networking approach that goes beyond traditional networking ideals and incorporates core DevOps values like network agility, network automation, and network orchestration into its operations. “Ops,” or operations, is tied to the overall business goals and includes parts of both development operations (DevOps) and security operations (SecOps). In short, NetOps represents faster application delivery and secure functioning of networks that aligns with the enterprise’s strategies and goals.

NetOps 2.0 advocates the modernization of networks, with technologies like software-defined networking, intent-based networking, and network functions virtualization. It aims to make network operations intuitive, context-aware, and analytics-oriented by adopting practices that are driven by AI and ML.

NetOps 2.0 encourages network teams to work strategically and in alignment with DevOps and SecOps teams to ensure the overall business goals are met. Here, DevOps and SecOps teams are given some degree of control over network infrastructure operations, as opposed to NetOps 1.0, where they were completely dependent on the network engineers for any network change related to their domain.

With businesses increasingly going digital, the pace at which they operate, be it delivering applications and services, rolling out bug fixes and updates, or addressing customer concerns, has improved dramatically. This can be attributed to the advances made in DevOps technologies and the rate at which they’re being adopted by enterprises – there are a plethora of tools in the market for every conceivable DevOps requirement. Some of these tools, like RedHat Ansible, Chef, and Jenkins, have been around for almost a decade now, and are moving from strength to strength in their capabilities.

Networks, however, haven’t been so lucky. To start with, they’re mind-bogglingly complex – a hodgepodge of systems, devices, and protocols from an assortment of vendors and time periods. A lot of those systems are likely to be legacy, and updates across the network are usually sporadic and inconsistent. Networks are at the mercy of individualistic requirements – changes are made on an ad-hoc basis without taking the long-term consequences to the network into consideration. A new server is added when there’s a spike in application traffic, and later promptly forgotten, firewall security policies are adopted and abandoned based on management changes, and so on.

With the advent of DevOps, applications are being developed and updated at an unprecedented rate. But without the support of an agile, robust network, it’s a long time before any of them can be deployed. Most network processes are still done manually, which explains the delay. And manual processes are quite error-prone, which, given their sensitive nature, can result in severe security breaches and outages.

The drawbacks with the NetOps 1.0 can place network and application teams at odds, with application teams viewing network teams as a roadblock to their agility. To bridge this ideological rift between the two teams, and to elevate the network operations to support and be on par with DevOps, NetOps 2.0 was conceptualized.

A Deep Dive into NetOps 2.0 Methodologies

NetOps 2.0 is centered around making networks agile, error-free, scalable, and secure. It braces the network infrastructure to handle the rapid pace of DevOps initiatives and the network changes that come along with them. They support speedy deployment, maintenance, and upgrade of applications across multiple environments. It revolves around the following three basic themes: 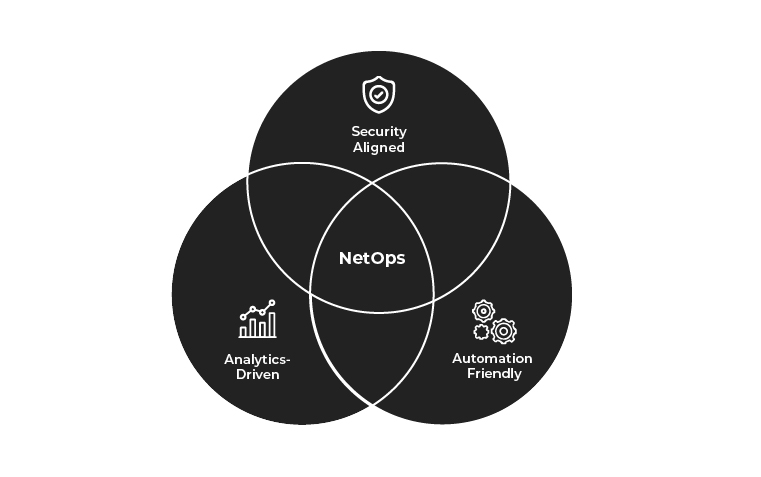 Security-aligned: Agility shouldn’t come at the cost of network security. Networks are highly sensitive, and most attacks happen due to some vulnerability in the application service infrastructure of the network, say a configuration fault in a firewall or load balancer. Network security issues are highly serious and can lead to crippling outages if not resolved in time. It’s imperative that network teams work closely with the security (SecOps) teams to make the network breach-proof.

Analytics-driven: Network data analysis is essential to predict and manipulate the network, optimize its operations, and detect and preempt problems before they occur. Data such as network performance during traffic surges, application instance loading times, and network quality metrics can prove invaluable in making network-related decisions.

Automation-friendly: NetOps 2.0 advocates widespread automation and orchestration of network processes. Manually making the thousands of network changes that the rapid pace of application delivery and update mandates is impractical as well as error-prone. Introducing automation wherever possible makes the network agile, secure, and error-free by increasing the pace at which network services are deployed and removing the need for human attention.

The philosophy for NetOps 2.0 was borrowed from DevOps, and so are the tools. Tools that were originally developed to help application teams automate their CI/CD pipelines were upgraded to include network automation capabilities in their repertoire. Configuration management tools such as Ansible, Puppet, and Chef fall into this category. These tools facilitated the shift from a scenario where network engineers had to individually log in to each network device to access their CLI to make configuration changes, to one where they could automate the task by just deploying programmed playbooks (in case of Ansible), or recipes (in case of Chef).

Nowadays, network component vendors also provide tools, or platforms, to manage the devices that they offer. An example of this is the BIG-IQ platform by F5. Most of these platforms have a GUI as their front-end, which eliminates the need for CLI scripting on individual devices. While they’re certainly convenient to use for network engineers, especially those who do not have a background in programming, using one platform each for the multiple network vendors could prove to be expensive.

Further down the line are GUI-based, vendor-agnostic platforms. They make it further easier for network teams to manage and automate network processes by providing a single-pane of control for all network components, irrespective of the vendor or environment. Ansible Tower, AppViewX, and Resolve are a few examples of such platforms.

To align with the NetOps 2.0 philosophy, the tools should: